While still docked in Passau due to low water further north, we were able to visit our next port by bus.  Regensburg is 1 1/2 hours away but we didn’t mind on a warm and sunny day!

Enjoying our sunny day in Regensburg

Regensburg is a medieval town that was spared extensive bombing in WWII.  I loved the narrow streets lined with colorful buildings.  The gothic St. Peter Cathedral looms over the town.  We had walking tour with our local guide Sylvia followed by a so-so lunch at the oldest restaurant, the Rathskeller.

Regensburg -The only remains of a Roman Gate

Regensburg – Our guide talks about the place where Oscar Schindler lived. Notice the anti-Trump signs. 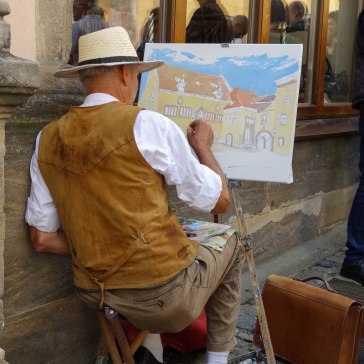 Artist at work in Regensburg

I decided to save room for sausages from the oldest sausage house in Germany.  We sat down and ordered beer and a plate of 6 sausages to share.  The server told us that we couldn’t share 6 sausages, “You must have 8!”.  Of course we said ‘Yes’.  What a true German experience!  They were very tasty and we bought some of the special mustard that they make there.

Having a beer in Regensburg

Light beer for me in Regensburg 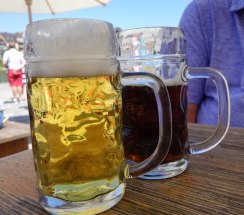 Guess which one is mine

One of the many towers in Regensburg

In the evening, we packed up for our journey the next day to the Viking Baldur in Nuremburg.

Unfortunately, we both caught colds.  There was something going around the ship and everyone was coughing.  We endured the 3 hour bus ride to Nuremburg and decided to rest up on the ship rather than go on another bus tour.

Our room on the Baldur is the same as it was on the Magni, even the picture on the wall.  We had some plumbing issues – the toilet overflowed and a guy had to work on it for a while.  The shower pressure was not as good on this ship.  Lunch and dinner service were really slow.  The service got much better as our cruise went forward although we never got as good service in the lounge as on the Magni.  It’s all supposed to be the same but you do get used to the staff on board.  I can’t really complain as it is a first world problem to have to change cruise ships!

The next day, we left the Danube and entered the canal that links the Danube and Main rivers.  It’s narrow with many locks. Since we had passed over the continental divide, we are now locking down instead of up.

Little Venice – Where the fishermen lived 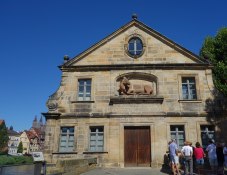 Guess what went on here 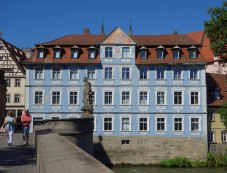 The artist had a sense of humor!

Bamberg is another one of the few cities that was not destroyed in WWII.  It’s situated on 7 hills, each one topped by a church.  In 1007, Bamberg was the center of the Holy Roman Empire and the capital of the region.  The cathedral sits above the center of town along with the Bishop’s residence and a lovely rose garden.  Our guide, Chris, was very nice and funny.  He was also a taxi driver and relished telling us the history of Bamberg.

The tavern pictured above with green shutters is known for its raunchbier, or smoke beer.  We were encouraged to try it but it was just too early in the morning.  People said that it tasted like liquid bacon.  That doesn’t sound too good to me!

The cathedral in Bamberg dates from the 11th century. An unusual sculpture of a man on horseback is a unique feature. 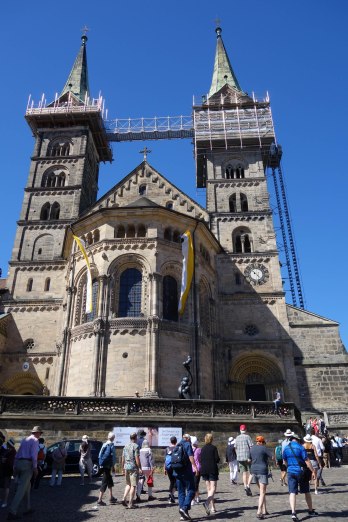 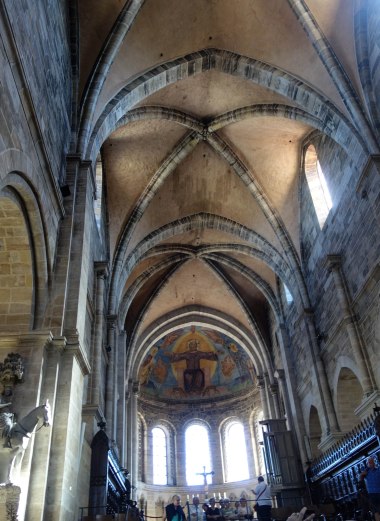 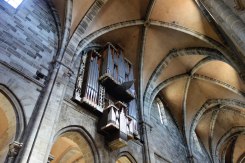 After the walking tour we found a nice cafe and ordered hot drinks and strudel (best one yet!)  Our guide told us where we could find an Apothecary with an English-speaking pharmacist.  Their drug stores are a lot different from ours.  There are very few products out.  The pharmacist ‘interviewed’ me to determine my needs.  She was a little abrupt but finally gave me some nighttime cold medicine (that worked well).  Another German experience!

Rose garden at the Bishop’s Palace

View from the Bishop’s Palace 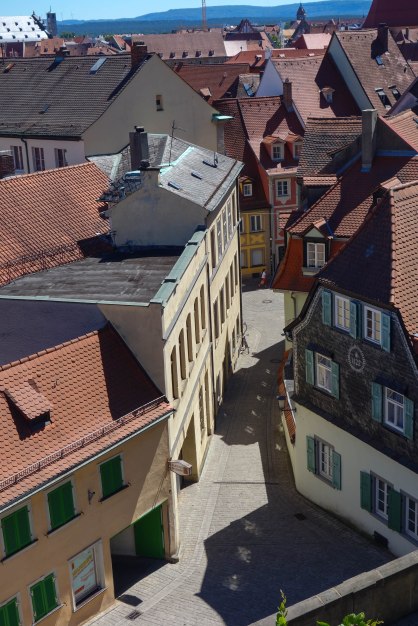 View from the Bishop’s Palace

On Tuesday we arrived in Würzburg and boarded a bus for our optional excursion to Rothenburg ob der Tauber.  The bus route took us on one of the most scenic roads called the ‘Romantic Road’. It winds through beautiful historic towns.  Our guide, Christina, explained that they consider themselves Franconians, not Bavarians and are very proud of their heritage.

I was fascinated by the amount of homes that have solar panels on their roofs.  The country decided to do away with nuclear energy after the Russian disaster and encouraged the growth of solar & wind power.  They now have enough energy to sell it to other countries.  I wish we would make it easier and encourage more solar energy in the US.

Rothenburg is the best preserved medieval town in Germany.  It’s completely surrounded by walls and is picture postcard perfect, especially on a warm, sunny day. 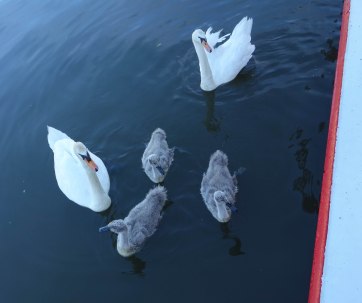 Mooching swans by the boat 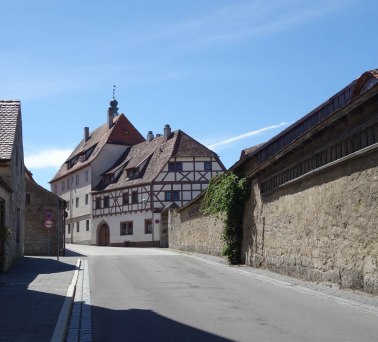 I was amused by the abundance of Christmas stores and cuckoo clocks!  After a short walking  tour and lunch, we were given free time to stroll around. 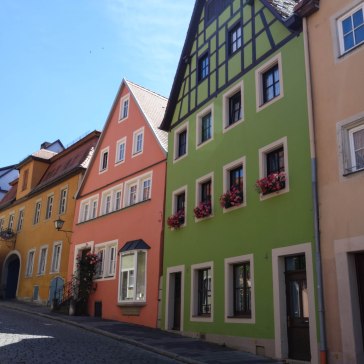 Climbing up the wall

View from the wall 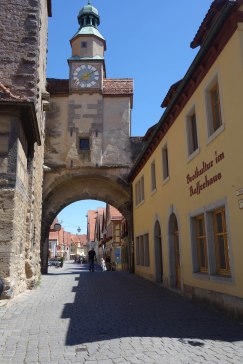 View outside the wall

So many pretty windows 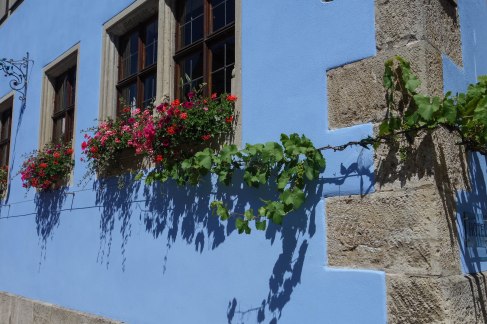 Arriving back in Würzburg, we were given a tour of the Bishop’s residence, another UNESCO site.  The palace is baroque and then some!  There is an impressive ceiling fresco by Tiepolo – the largest in the world.  Each room was gaudier than the last.  Much of it was destroyed in the war and then rebuilt.

Christina was so much fun!

Our guide, Christina, gave us a humorous and slightly snarky history of the palace.  She pointed out flaws in the paintings and made fun of the excess.  She reminded me so much of our friend Eva, they could be twins!

We had a nice dinner on the terrace as the ship moved along the Main river.  The river winds around hillsides covered with vineyards.  We were also treated to a glass blowing demonstration after dinner.  The artist came from East Germany and turned some people off with his political views.  I found him very interesting and was amazed to see how glass is blown. 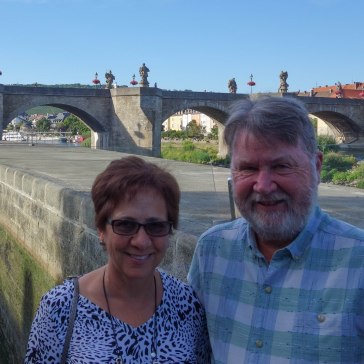 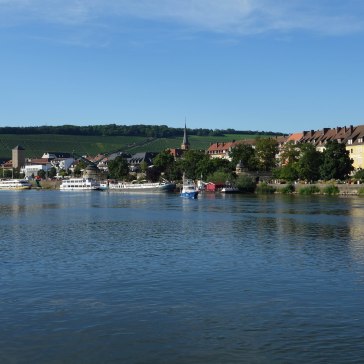