I loved everything about Paris.  We enjoyed wonderful food, museums and generally just being there.  We met up with our sailing friends, Jack & Sue, who were staying in Paris for the month.  My mussels and fries were delicious.  Skip’s burger…not so much.  It was impressively large but cooked to shoe leather! 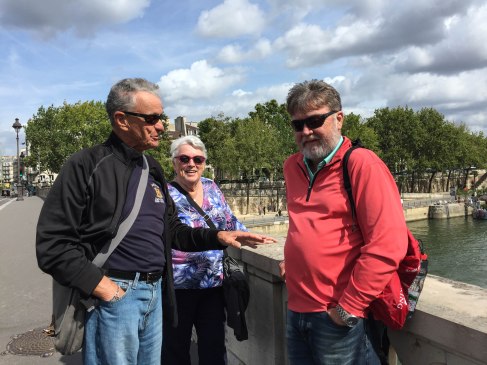 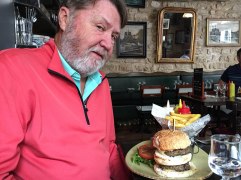 Cooked until bone dry. Do not order burgers in Paris! 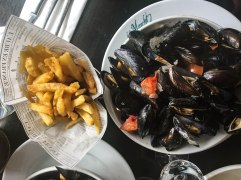 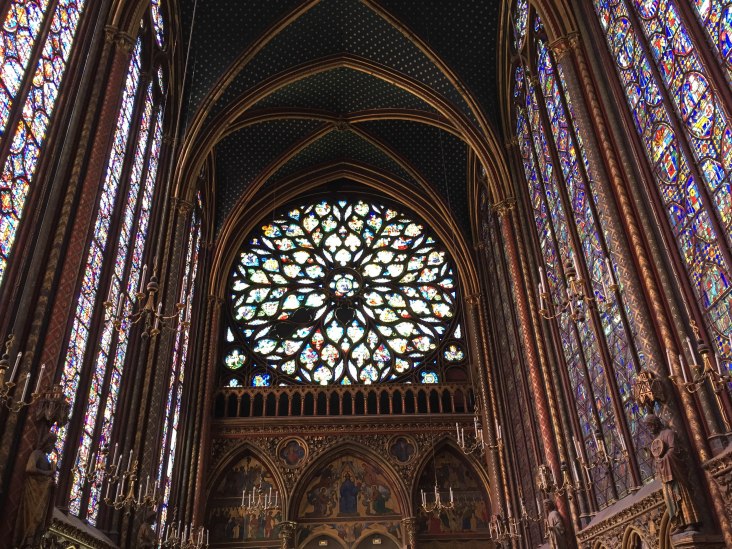 END_OF_DOCUMENT_TOKEN_TO_BE_REPLACED

Even after seeing the photos, nothing prepares you for this.

Our full day touring the Normandy beaches started with the D-Day museum in Arromanches.  An informative film shows how the Allies built a harbor here in preparation for D-Day.  How do you build a harbor where none exists?  The elements were prefabricated in England, shipped over and assembled.  The harbor was operational in 12 days.  Talk about a feat of engineering.  The harbor was critical for unloading goods, men and vehicles needed for the invasion.  A few parts of the harbor remain. END_OF_DOCUMENT_TOKEN_TO_BE_REPLACED

Continuing our year-long celebration of our BIG birthdays, we tried river cruising for the first time.  Our Viking cruise went from Paris to Normandy with several stops along the way.  I loved it!! We’re hooked!!! 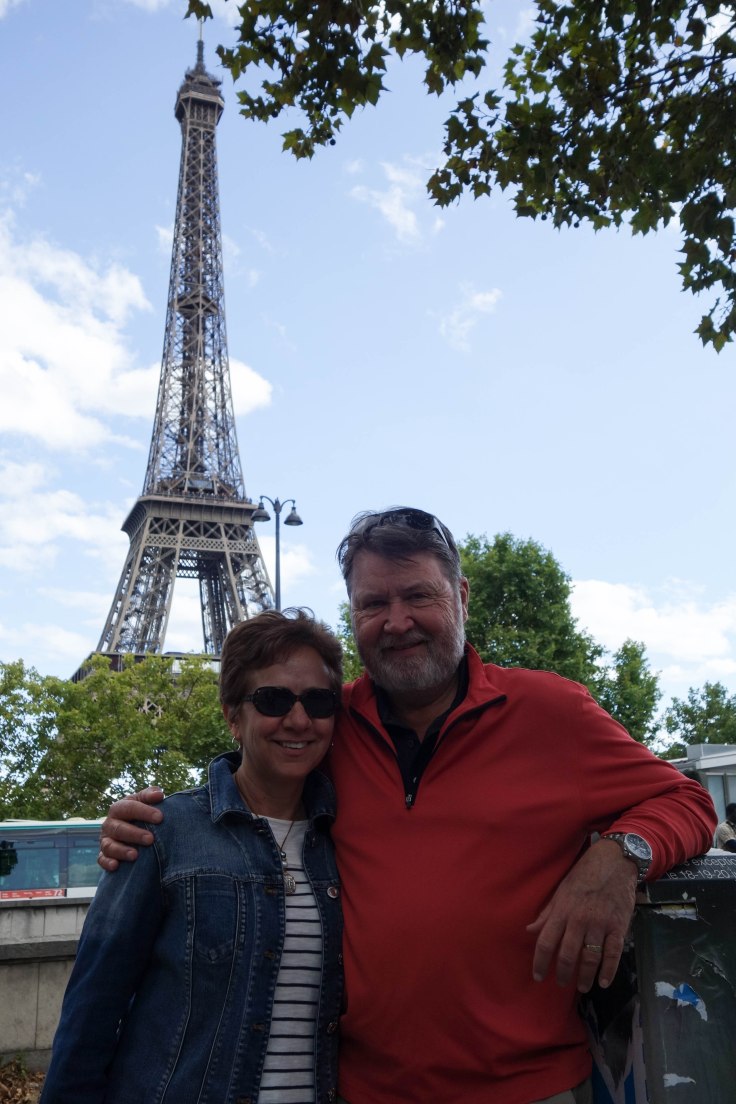 END_OF_DOCUMENT_TOKEN_TO_BE_REPLACED

At last we arrived in Denver to stay with Skip’s daughter Jen and husband Bill for a couple of weeks.  We have so much fun hanging out with them.  Bailey had the pleasure of meeting his nephew Chester for the first time where he assumed the role of the grumpy old uncle.  Poor Chester didn’t know what to make of this dog staying in his house who didn’t want to run around and play.

END_OF_DOCUMENT_TOKEN_TO_BE_REPLACED 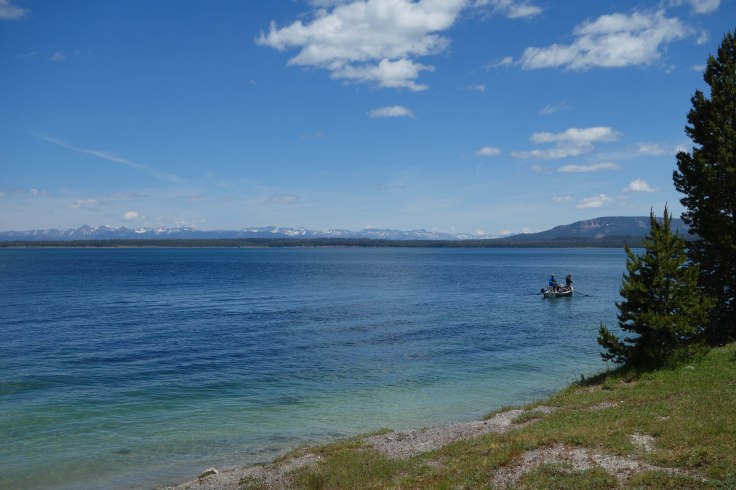 Our journey continued to the southeast side of the park where we visited the beautiful lake area.  Lake Yellowstone is the largest high elevation lake in North America.  I was struck by the range of blues and greens in the water.

We enjoyed  lunch at the elegant Lake Yellowstone Hotel where Jen and Bill had spent a summer working while they were in college and fell in love with the West.  I liked this area as it was much less crowded than the other spots we visited. 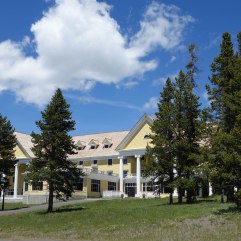 We had a lovely lunch at the Lake 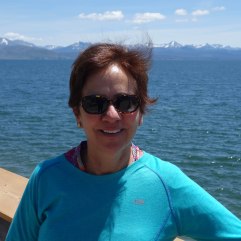 END_OF_DOCUMENT_TOKEN_TO_BE_REPLACED

On our first day of exploring Yellowstone we decided to drive the furthest away to Mammoth Hot Springs and work our way back.  In hindsight it would have been better to split the stay between both ends of the park but we were limited by dog-friendly hotels.

END_OF_DOCUMENT_TOKEN_TO_BE_REPLACED

Our 3rd driving trip out west was a lot of fun (except for the long driving days.)  I really don’t enjoy driving but we tried to minimize long days and audio books made the time pass quickly.  The highlights of the trip were spending a weekend in Kansas City, MO while Skip attended a wood-turners conference, visiting Yellowstone for the first time, spending time with Skip’s daughter Jen & Bill in Denver, seeing my brother Alan passing through Denver and visiting Skip’s sister Nancy and Don in Ellijay, GA.

END_OF_DOCUMENT_TOKEN_TO_BE_REPLACED

Exumas, We Love You! 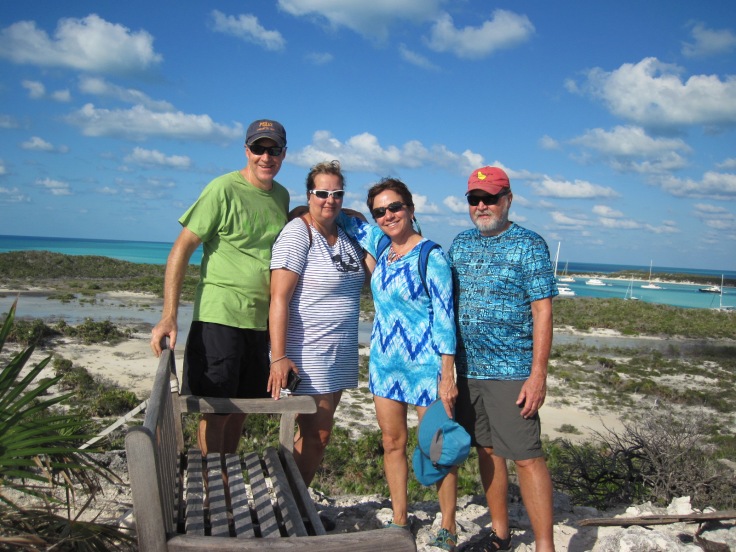 Ever since we sold our boat we’ve dreamed of sailing back to the places we loved the most.  The remote islands of the northern Exuma chain in the Bahamas are not easily accessible.  That’s the reason why we loved it there so much.  The unspoiled, uncrowded beaches and glistening turquoise waters are only 30 miles from Nassau and the best way to visit is by boat.  Luckily, our sailing/cruising/travel buddies Rick and Eva had the same longing as us.  Rick found us a charter boat from Navtours that we could take one-way from Nassau to Staniel Cay in a week.  The plan was expertly formed and executed! END_OF_DOCUMENT_TOKEN_TO_BE_REPLACED 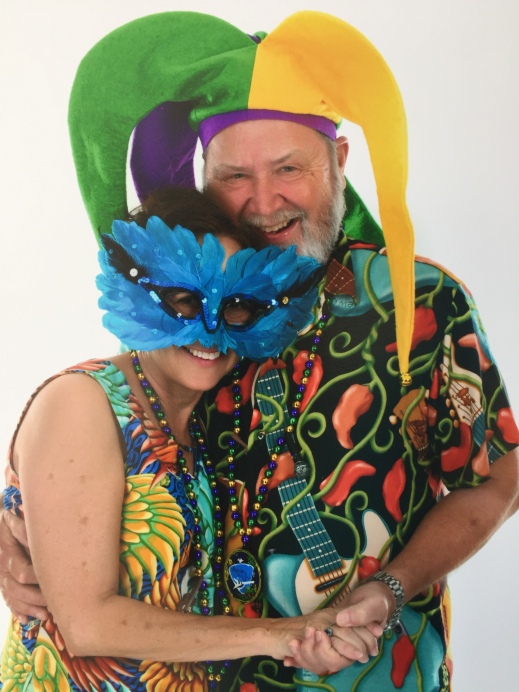 We had one of the funnest vacations ever on the Legendary Rhythm and Blues Cruise.  The entire ship is chartered for blues music fans and musicians.  We’re talking live music day and night all week long!

The Holland America Koningsdam is a brand new ship and it’s beautiful.  We were very comfortable leaving Ft. Lauderdale in high seas and lots of wind.  The cruise had a rocky start when the power went out to the entire Port Everglades. Luckily, we arrived early and were already checked in through security and allowed to board.  Everyone else had to wait in long lines outside until power was restored.

The ship made 3 stops and we had 3 days at sea.  We’ve taken cruises before but they were nothing like this one.  First of all, all of the old people were really cool and there were NO kids!  The entertainment was all music with 6 venues and musicians performing multiple times all week.  By the end of the week, they were joining each others performances and jamming together all night long.

There were theme nights where people got all decked out in costumes. No formal night – it was pajamas! We enjoyed the casual atmosphere and people-watching. It looked like the crew was really having fun along with everyone else. 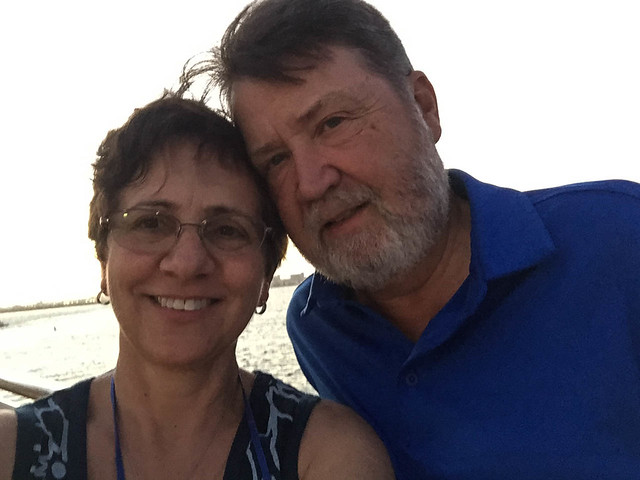