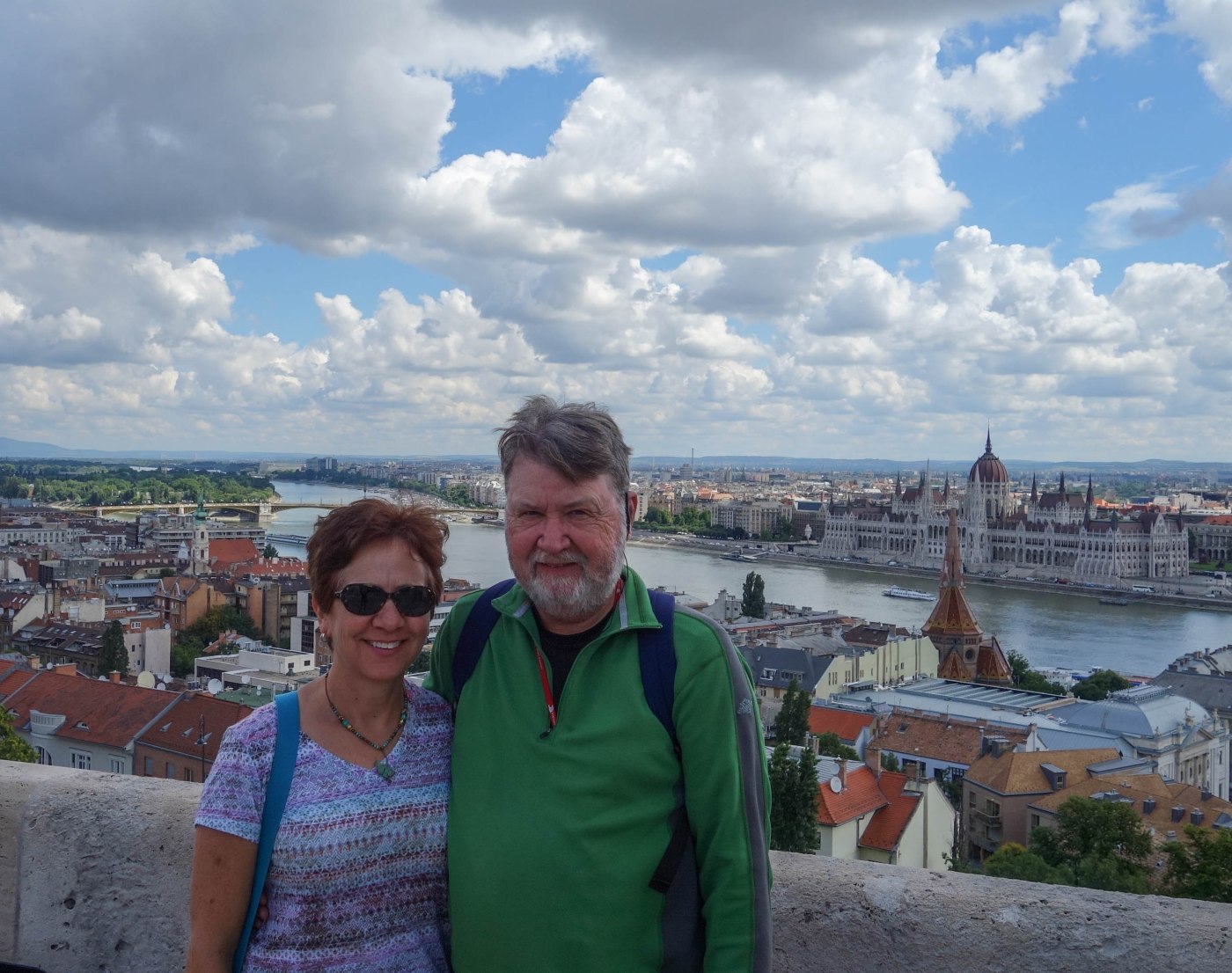 We liked the Viking river cruise that we took last year so much that we signed up again.  This time we went on the Grand European trip from Budapest to Amsterdam.  What a fabulous time!  We saw so many beautiful medieval towns and learned a lot about Hungarian, Austrian, German and Netherlands history and culture.

We endured our flights from Ft. Lauderdale through Toronto to Budapest.  Even with an economy plus upgrade, it’s still not comfortable to sleep on a plane.  Our Air Canada flight to Budapest was an older, smaller plane with a broken water pump.  That meant no hand washing (they had wipes) and no coffee….arrgh!

We were whisked away to our hotel by Viking reps that met us at the airport.  The Hotel Intercontinental is located centrally on the Pest side, close to most attractions.  As a bonus, the city was hosting the Red Bull air races that weekend and we could see the planes flying over and under the Chain bridge from our room.  They were loud and fast! 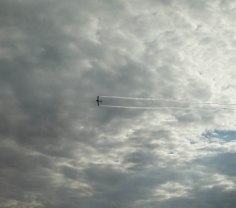 After resting up our first day, we took a Taste of Budapest tour on Saturday morning.  The tour of Parliament took us through the visitor’s side where we saw opulent, gold patterned stairways and hallways along with the heavily guarded (no photos!) Hungarian crown. 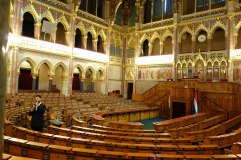 Our tour guide then took us through the streets of Pest where we learned about the buildings and history, including the 1956 uprising where many peaceful protestors were killed.  We visited a little market and had goulash and pastries for lunch.  After the tour we wandered on our own and visited St. Stephan’s Basilica.  Skip went back for a rest while I took a look at the famous shops on Andrassy Ave and the shopping district near our hotel.  It was much chillier that we expected so I found an extra sweater. 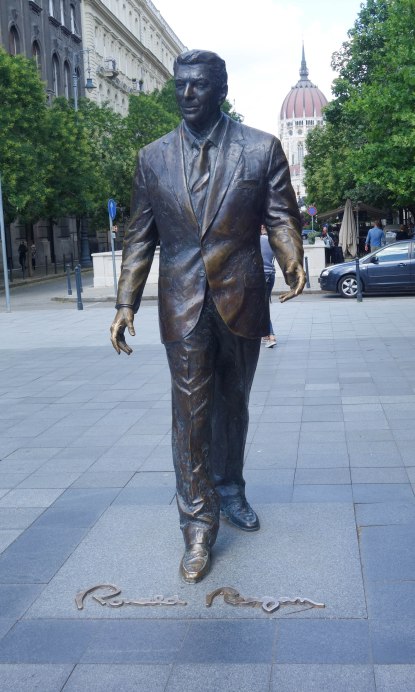 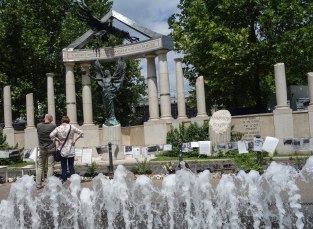 Magic fountain stops when you enter 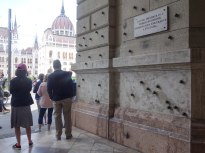 Budapest is a lovely city, very safe and easy to find your way around.  Most people speak English and with many of the signs in English, it hardly feels like a foreign city.

We enjoyed dinner at an Italian restaurant near our hotel.  The best part was the plate of freshly sliced prosciutto di sauris. We walked across the Chain Bridge now that it was open after the air show.  We saw our ship going under the bridge and waved to the people ending their cruise so we could board tomorrow. 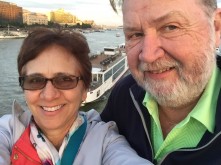 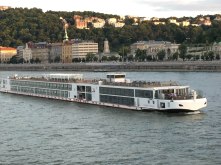 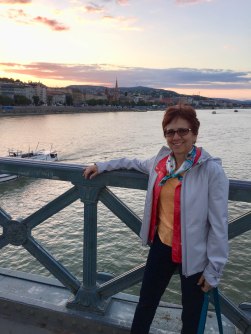 On the Chain Bridge

On Sunday we checked out of the hotel and Viking took our bags to our ship.  Since we knew where the ship was docked, we decided to keep exploring Budapest.  First, we went to look for the Shoes on the Danube memorial.  It was blocked by fencing for the air show but we still got to see this moving tribute to the Jews who had to remove their shoes before being shot and thrown into the river.

We also visited the Dohany Synagogue with its many memorials to the Jews killed in WWII.  The synagogue is more ornate than usual.  It’s congregation were the equivalent of Reformed Jews in the US.   They tried to assimilate more with the general population in Budapest.  Each leaf on The Tree of Life contains a name of someone who was killed.  I found one memorial that contained my grandmother’s family name.  I guess they could have been distant relations.  It was a very moving experience.

A tree grows on the walls

The synagogue is much more ornate than usual

The synagogue is much more ornate than usual 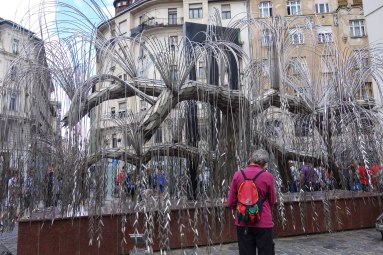 Tree of Life – Contains the names of 5,000 Jews buried nearby

Each leaf on the Tree of Life contains the name of a Jewish person buried nearby – over 5,000 names

My grandmother’s family name was Gottfried

The Jewish quarter is a very vibrant renewal area of Budapest, full of shops, clubs and cafes.  We found a long alley stretching many blocks that was lined with restaurants and local artisan booths.  We couldn’t decide what to do for lunch and settled for gelato!  Skip was in his happy place!

We found our boat, the Viking Magni, and settled in.  Our cabin was smaller than our last cruise.  We got the French balcony which has just a sliding glass door instead of a veranda.  In hindsight, we should have sprung for the balcony since the upper deck was closed for several days during the cruise due to low bridges.  It would have been nice to have our own balcony to sit outside while cruising.

After dinner, the ship did an evening cruise on the Danube so we could see everything lit up. 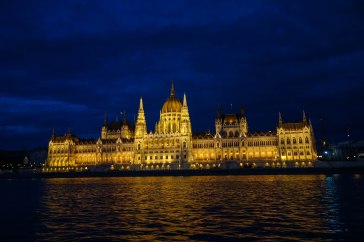 Parliment at night as we take a night time tour 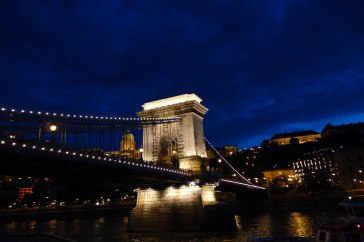 Chain Bridge as we take a night time tour

On Monday, we took an optional tour of Castle Hill instead of the included Budapest overview bus tour since we had already seen a lot of the city on our own.  There were only 6 of us on the tour along with our guide, Victoria.  It was nice to be in a small group and not with a busload.

We took a tram to the Chain Bridge and walked across the Danube to the Buda side.  A funicular took us up to the top of Castle Hill.  We walked around the Palace which was destroyed during the war and rebuilt to house a museum.   Castle Hill has quaint streets full of gobs of tourists.  It reminded me a lot of Montmartre in Paris.  The views from the Fisherman’s Bastion were spectacular. 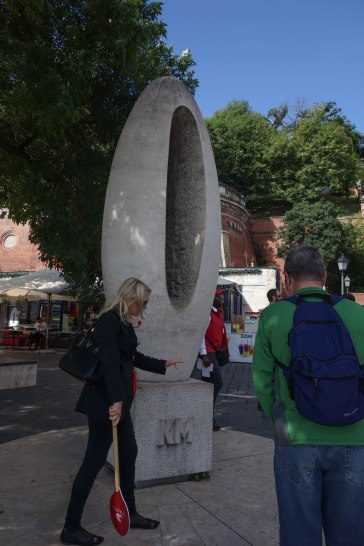 Our guides shows us the Kilometer 0 marker 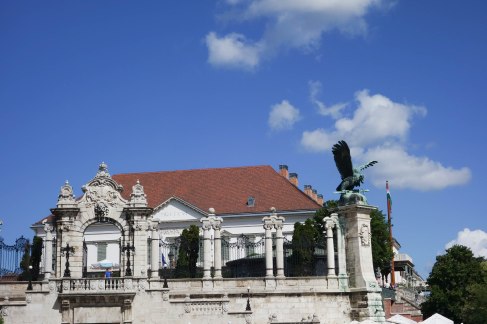 Funicular that takes us up to Castle Hill

Mathias is a bright white confection with colorful tile roofs.  In our free time, we enjoyed some home-made lemonade and strudel. 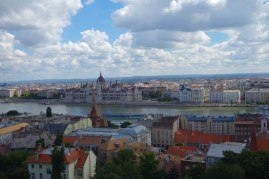 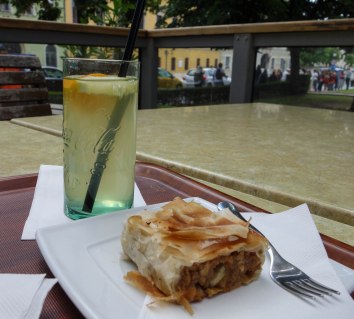 We walked back down the hill and across the bridge.  Both of us were glad that our guide was running short on time and opted to take the tram back instead of walking Vaci street since we had already seen the shopping district.

She dropped us off at the Grand Market which is very clean and full of fruits, vegetables, salamis and meats.  The upper level had plenty of tourist crap.  We just bought some paprika and foie gras.

We sailed away from Budapest in the evening, heading for Vienna.